This was really my first surround sound system, and I can say I am pleased.This system is compact, one compact center channel speaker, a left and right compact speaker, a compact left and right rear speaker, and a nice sized subwoofer. Everything is hard wired and operated by a small control unit that is wired to the subwoofer. All the inputs and speaker outputs go through the subwoofer.Available inputs are 2 toslink, 1 coax, 1 RCA and one computer style with 3 3.5mm jacks.The unit can be operated with an included IR remote that lets you select inputs, volume and effects.And the effects available are: fFull DTS sound, where the unit decodes the full digital 5.1 signal.Simulated surround sound which uses all speakers.A quad sound , where the system uses only the front and rear left and right speaker and the subwoofer.And a straight stereo which just uses the front speaker and subwoofer.So a bunch of different options depending on what you want to do, but I don't understand why you wouldn't want the full 5.1.The sound quality for a more compact style system is great for me. I have the system set up in my mancave running optical line from my SAT box and Xbox 360 and I am more then happy with all the sound quality.From the reviews I guess the previous sound system to this was better, but I have no qualms with this system, good bright sound, a subwoofer that will rattle windows if you have it up loud enough and nice looking setup.If you have any questions about the system please feel free to leave a comment and I will be happy to answer.

What a difference!I do NOT wear "cans" for gaming or music listening so these speakers were on my short list of systems to get without going full home 7.1 rated.It is replacing a Razer Leviathan system (previous review) that replaces an old set of Logitech 5.1 speakers.Set up is easy, set the speakers up, put the amp/kicker where you want it , fed the color coded wires to the back of your kicker then to your speakers.I used a DTS cable to run from my computer to the kicker interface, trust me ...buy a DTS cable rather than use that provided color coded wires.Your ears will thank you.Set up your settings via your computer , make sure your control for the system is set to 3 or 4 (whatever your dts is plugged into) put the computer settings where you like them, run the test a couple times.Rock out OR ...be ready to duck a couple times if your play a FPS and a bullet wizzes by your head.I know these aren't "pro" 5.1 but , as far as every day non audio engineer types playing computer games and listening to music (movies as well) these are PERFECT all around speakers with great quality,easy set up and possible to expand in future (better wires , extra speaker etc.

Hi... this review will helps.. who wants to buy best home theater...1.First i would like to say sound quality is amazing....Only for watching movies....Mp3 songs Average....2.How Dolby surround work.. You have to connect through OPTICAL input 100 % Dolby sound will work perfectly...3.Required Set of box AIRTEL 4k INTERNET TV Box OR AIRTEL HD Set of box must required..Watching HD channels Simply wowwwwwww Feel Dolby Dolby Dolby ....Other set of box In india all are very worst audio i am not recommending for others ...every one say HD but fake....I tested all set of box...I trough out sun direct & Tata Sky other set of box audio is very very worst....4.Watching movie though USB connect to TV..TV must required Optical out put ..Dont connect through audio jack and RC pin...Its work normal...5.Home theater Design 10/10 Specially control unit looks HI FI SYSTEM..Remot control simply the best....6.Side Speakers 5 Nos Each speakers weight is minimum 1 kg. clarity of sound is Amazing in high volume.....7. SUB WOOFER size 8 inch i cant believe the base punch is like Stone....Best in classs...True Dolby Base....Set of box & TV have Optical out Put ..Close your eyes and buy it this....100 % worth...Who wants true dollby surround system This is the Best one..( Dont waste your money to other branded like yamaha & Denon & sony ...i checked all the winner is Logitec Z906 only...You have normal TV & Normal set of box Dont waste your money in this home theater...buy it low budget home theater... 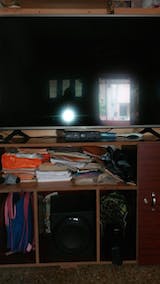 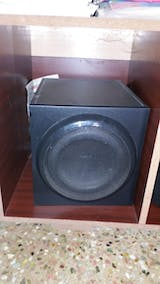 Works Wonderfully! The sound is great! The old adage "you get what you pay for" is certainly befitting for this system. Solid and heavy to absorb the vibration. No crackle normally heard on cheap speakers because they are too light and not made well. I have used the system with playing games mostly. It really sounds great with Battlefield 1. And, I was really impressed how my Pat Benatar Greatest Hits CD sounded! The base is low and rumbly. The thump - thump of the music comes through really well. All-in-all, I love my choice and I do recommend this product if you are a hard core gamer and want to hear the really cool sounds of boots running up behind you or the sounds of CD's the way they were meant to be.

I have mixed feelings on this sound system because it deserves two different kinds of rating.First of all I want to say this: in all fairness, some people rate this lower than they should because they are using it for a home theater system. That's nonsense. The fact is, this is a sound system for a computer or videogame set up. As such, it is one of, if not THE best on the market. That has caused some people to use it for their home theater, which is understandable and doable for a cheap way out, but you should not expect the ultra highs and lows of a real home theater sound system. I have an expensive home theater system in my living room, but I don't even think about comparing this to that quality of sound. It's not fair, this entire system â€“ amplifier and speakers â€“ is only 350 bucks; come on now! Twice that wouldn't buy one of the subwoofers for my system, or the amplifier by itself. For the money you can't beat this sound system.When it comes to the sound this speaker system produces, it is absolutely phenomenal. I mean, I'm hearing background noises, echoes, reverberation in castles and dungeons, and deeper base in explosions than I ever heard before in games, and I thought I had a decent sound system before. Modded Skyrim sounds amazing, like you are right there, and other games have an appreciable realistic sound. The high-end over 15,000 Hz is a bit weak, so Logitech should make some improvements in the tweeters in the next rendition. Otherwise, the speakers are of a very good design and weight, and I like that all five satellites are the same.The AC 3 sound circuitry has good separation, and I highly recommend people use the optical cable. If you don't have one, get one, it's worth it. BTW, Logitech should include one, but they don't. I thought that was a bit cheap on their part. The speaker wire gauge is OK, but a bit thin, so you might want to replace that. It was smart of them to include longer cables for the rear. I'm only using their cables for the front three, but my rear speakers are farther away so I use a thicker gauge. Logitech did well by letting it be a standard connector on both ends, rather than RCA plugs, so you can easily swap it out.What about system design?Part of it is good, like the separate unit for adjusting sound for each speaker and the nice, long attachment cable so you can locate it anywhere. Part of it is downright stupid.Logitech, you screwed up by not putting an exterior heatsink on the amplifier. You had one on the previous version of this sound system and should've kept it. The amplifier is inside the sub woofer, and it gets hot, real hot, even when you're NOT playing music or games. There's no reason for that, it should back down. Heat is the worst enemy of electronic circuits, and that means the heat inside the subwoofer box builds up because there's no ventilation. None can be added without screwing up the sound qualities of the sub. The ducted port does not count because heat cannot escape from it. Whoever suggested this in the design committee should be moved to the mailroom. I use my computer for work and play, thus I have to shut the sound system off during the day because the stupid thing gets so hot. For this price, I know Logitech is not using the high-quality Japanese capacitors that can take more heat, which means the amp will most likely have a short life span if used a lot.Conclusion: if you want a great sound system for computer or videogame set up, you cannot do any better. You can also turn the sub woofer on its face and cook eggs on the back plate. Nevertheless, my games sound fantastic, and that's what I bought this for.For sound I give this system five stars.For design I give it three starsIt only deserves four stars at best.I'm giving it five stars to offset the unfair people who are down-rating it it as a home theater system.